My March beauty box made its way to me while I was on Spring Break. My goal was to try everything right then but my children had other plans. I had received the email that it was on it’s way and a brief on what was in it and I was still excited to open it when it arrived. I thought about doing another video unboxing and review but by the time I would have gotten through with it, my April box would have been arriving. So I am going to get right to the reviews Uncle Funky’s Daughter Magic Curl Stimulator: Upon opening this to take a whiff, I did not care for the smell. Despite the name, it wasn’t funky. It just reminded me of something long ago that I just did not like. I think it was a medicine that I had to take as a child. The product is thick and not oily. Almost like a conditioner and gel in one. In all honesty it comes out like snot. Sorry for the graphic but that is what it reminded me of. The directions say to use after washing and conditioning, combing and detangling. Idk if this is before the leave-in conditioner or not. I used this and did not detangle (because the last time I did that I was super frizzy). I saw a bit more definition in the parts of my hair that normally curl. In the picture, my hair is sort of straight. I had just taken it out of a low bun. I then got it wet in the shower and applied the curl stimulator while it was still wet. You will see that part’s of my hair still look straight or frizzy. That is how my hair normally looks when wet. My hair does not have the same curl pattern all over. I will say that the product smelled better or it even smelled less while on my hair. It did not nauseate me like I thought it would. At first, I did not see any significant difference in my hair from my usual wash and go. As it dried though, I could see that my curls were more defined. I like it but probably won’t rush to the store to buy. La Belle Femme Pomegranate Kiss Body Butter: When I saw the description of vanilla and pomegranate fragrances, my nose was just itching to smell this. Knowing that I am a tad bit sensitive to fragrance anyway, I did not expect to like this. Even when something smells good in the jar, I can put it on and then not be able to stand myself until I shower it all off. But this was delicious and did not make me nauseas at all. The scent is not strong and did not last all day unless I sniffed my arm with my nose really close. I am not a fruity kinda gal either. I bybass Victoria’s Secret, Bath and Body Work fragrances. I usually can’t stand them…well except for one, but we aren’t talking about them right now. This stuff smells so good I want to eat it. It moisturized and left my skin glowing. I have pretty thirsty skin so by the end of the day I needed to reapply. Overall, I am pretty happy with the product.The hub even liked the smell. Did I mention it’s vegan? However, don’t leave it in the car in hot temps, this will melt and leak out everywhere. Unfortunately, I know this from experience. Creme of Nature Argan Oil Perfect Edges: This has pretty high reviews on Amazon ( I read Amazon reviews ALOT!). But yall, I just was not feeling this one. Ok, well actually it worked great. It was the smell that got me. Argan oil smells great, initially but by the end of the day it was all I could smell. As I have mentioned before I am very sensitive to fragrances. They smell good at first and then after some wear, I get nauseas. That is how this edge control made me feel by about hour 2 when all I could smell was my hair while cooking dinner. I like the result it had on my hair. My edges were smooth. You do need to brush it in a bit. I had in two french braids when I put the product in. I have another product that is very similar to this with little fragrance. I think I will have to stick with that one. Bite Beauty Lipgloss in Opal: This gloss has a pearl, iridescent appearance. It looked like it might be cute on. However when I first wore it, I did not think it was that cute on-at least not by itself. I really liked how it moisturized my lips so I kept putting it on everyday. The hub asked if it the color was called Cotton Candy. It isn’t although that would have been a good name for it. I think it might look better over another color. Idk what color though. My lips felt nice. The smell is kind of like a vaseline and not a fruity smell like most glosses. I didn’t mind that though because it was a light scent that went away within seconds of applying It has been dry as sand here and my lips looked like they had been kissing flour. I loved how good my lips felt after applying this gloss but because of the color I looked like I was going to a disco ball. I may try this again in another color…like clear. Biossance The Revitalizer: I have never heard of this. As usual I turned to amazon to read up some reviews. But all that came up was other products that had squalane in them. So there had to be a reason Amazon took me to “squalane” products instead. I looked up some information about squalane and Biossance. I saw that there were reviews on glossybox.com of this product. It mostly had all five stars from every reviewer. I could not find anyone that did not like it. So with those high reviews, I thought, well now I must try it. One of the reviews mentioned that It contains squalane which is oil taken from shark liver. However, upon reviewing the Biossance website, I learned what squalane is and that they do not take it from sharks but have instead “Every drop of Biossance’s patented form of Squalane is derived from sugarcane plants.” Read up more about it here. At first, I wasn’t going to use this because I felt like I have my skin care routine the way I like it for my face. And if it ain’t broke… But after reading such wonderful reviews, I had to try it. The top is a dropper in which you only need 2-3 drops. Most people have reported noticeable results in as little as 5 days but the box says that most differences in skin will take about 2 weeks. I have only been using it for 2 days (in the morning) and I have no complaints. I have not broken out -which is what usually happens when I change to a new product. I feel a little oily, but perhaps I should scale it back to 2 drops instead of 3 and try putting it on at night after my facial wash. I have not worn it under make-up yet.  It says that you can use this on face, neck, body etc. Perhaps I will try this on my legs and hands, goodness knows they are thirsty for something super moisturizing! So far, I like. Will update in about two weeks.

All in all I’m rather pleased with the products in this months box. Would love to hear from readers who have tried any of these products, let me know how they worked for you. See you next time…. 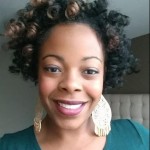